Posted by John Bihn Posted on March 24, 2021 0 Comments on The Bluebikes Journey Begins: Wandering through West Roxbury
Posted in Uncategorized

Just like the saying goes, every journey begins with a single Bluebikes station. Or at least, that’s what I said to myself as I set out to explore the southwest reaches of the Bluebikes system.

As I referenced in my introductory post, my goal this year was to use the Bluebikes network to explore new areas of Boston. But my adventure started in an area I was quite familiar with – the Arnold Arboretum. I was enjoying an unseasonably warm January day, completing a partial loop of Peter’s Hill, when I realized my 45-minute ride time limit was approaching. What started as a search for a place to dock my bike turned into an exploration of the West Roxbury bike lanes and Bluebikes stations.

Exiting the Arboretum through the Mendum Street Gate, the one thing I didn’t expect was the steep gradient facing me. But after that, it was smooth sailing towards Fallon Field, with a paved path allowing me to cross through the shadow of a towering three-story slide to my first stop.

This station is just down the street from a bicycle repair shop on the corner of Belgrade Ave and Walworth St. Technically, the station is on the edge of Roslindale, rather than West Roxbury, but it’s a convenient stop for those traveling in either neighborhood.

After a brief rest, I travelled west down Belgrade Ave. towards the three West Roxbury stations. There was a convenient bike lane, though it was an adjustment riding near traffic after riding through the Arboretum and quieter side streets. From there, I followed Centre St. to the southwestern limit of the BlueBikes system.

The stop was right in front of a plaza dominated by Star Market, along with some smaller stores and restaurants. It’s also not far from a few schools and the West Roxbury VA Medical Center, so I’m curious how many people commute via this station in the warmer months.

I then backtracked towards another station on Centre St., getting to pass the beautiful St. Theresa Avila church again. I took a detour through Billings Field, which has a paved path that nearly circles the park. Between kids playing tennis and others taking spread-out walks, I wasn’t the only one enjoying the January warmth.

This was a neat station, as it overlooks the Y in West Roxbury, and is practically across the street from the West Roxbury Public Library.

Rather than take the direct route to the last West Roxbury station, I noted the Hancock Woods nearby, and went through the side streets of the neighborhood to see if I could find an entrance that would be suitable for a bike. Alas, while it seems like the Woods could make for a nice walk, it certainly is not recommended for bikes.

In retrospect, I discovered how close I was to Millennium Park and Brook Farm, both with paved trails that seem well-suited for laps on a bicycle. All the more reason to plan a return to West Roxbury!

This station is actually tucked away from the road, in an alley adjacent to the West Roxbury Post Office. It’s placed here to split the difference between the stores on Centre St. and the Highland commuter rail station on the Needham Line.

On my return home, I aimed for the Allandale Woods, once again exploring the side streets of West Roxbury to get there. Since the signs discouraged bicycles due to erosion, I jotted these Woods down as another place to revisit on foot. 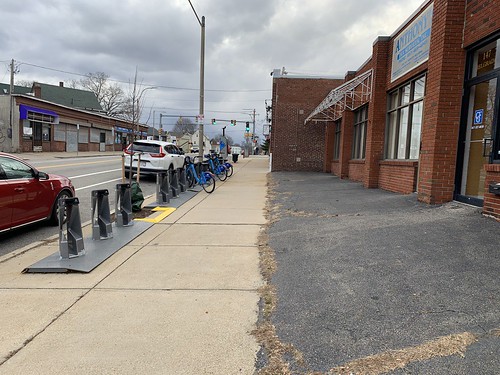 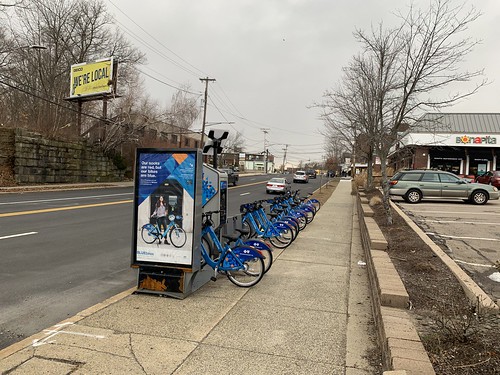 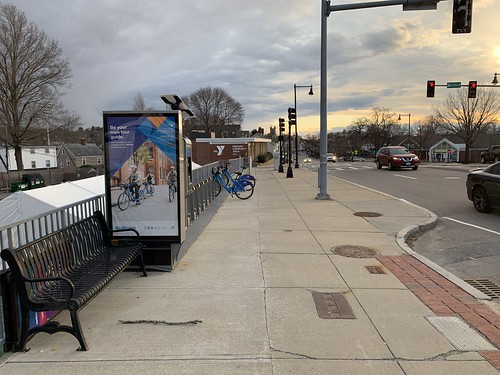 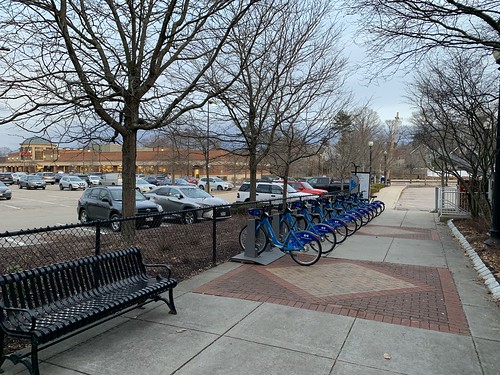